New Changes At The Border & Support For Young Migrants

Today we had a special guest, her name is Yunuen, she is also part of our team at Lincoln-Goldfinch Law and she wanted to join us today during the broadcast. Yunuen is part of the team of consultants of our firm. We also had our usual hosts Karla Arévalo and attorney Kate Lincoln-Goldfinch. Today we focus on the latest news we have on the situation at the border and for asylum for immigrants.

The changes announced this week were regarding the Migrant Protection Protocols (MPP) program that was created by the previous administration in an attempt to interfere with the asylum application process for immigrants from Central America. This program began in 2019 and involved sending immigrants from Spanish-speaking countries to Mexico to wait there for their asylum petition to be processed and to be scheduled to appear before the Immigration Court. This led to the establishment of homeless immigrant camps at the border, which led to many other security problems affecting the welfare of the immigrants there.

Recent Changes to the MPP Program Have Been Announced

Later, a new regulation, Title 42, was implemented which closed the borders to those seeking Asylum as a result of the COVID-19 pandemic. When the new administration took office announced that they would cancel the MPP program and begin scheduling the nearly 70,000 people who were at the border waiting for their hearings. To date, nearly 15,000 cases have been processed, and the applicants are inside the U.S. waiting to be scheduled to appear in Immigration Court.

Texas Attorney General Ken Paxton filed a lawsuit in Federal Court and the Judge ordered the current administration to reinstate the MPP program guidelines for all applicants from Spanish-speaking countries. The Supreme Court affirmed this decision. At this time it is uncertain how this new program will work. Most likely they will have to register in Mexico and then be called for their hearings, without the possibility of entering the United States. We will keep you informed of any further updates regarding this process. So far the only people who can cross the border and apply for asylum are minors who are not accompanied by their parents.

Those who are part of the MPP program and are already in the United States waiting to be called before the Immigration Court will not be affected by this change, they are safe.

Today's guest, Yunuen, told us about the most frequently asked questions she receives during legal consultations and attorney Kate answered them. There are two different types of cases that can be filed: Affirmative Asylum and Defensive Asylum.

Affirmative Asylum is applied for by a person who has entered illegally without being apprehended by the authorities or who has entered legally using a Visa. This application is sent and an interview will be scheduled with an Asylum Officer, after which it is decided whether it is approved or not.

This is different from the case of Defensive Asylum in which the applicant was captured and is in Deportation Proceedings, or their Affirmative Asylum case was not approved. These individuals have the opportunity to prove that they fear returning to their home country because they have suffered or fear persecution because of their race, religion, nationality, political opinion or membership in a particular social group.

For Affirmative Asylum, the time it takes to schedule the interview ranges from 6 months to 6 years, the same as for Defensive Asylum cases when the applicant has not been detained.

If the applicant has been detained, the case must be completed within 6 months. It is important to note that if the asylum application, whether Affirmative or Defensive, is submitted within one year of entry into the country, the applicant will qualify for an annually renewable Work Permit. So this person will be able to get a Driver's License and Social Security, without any fear of being caught or deported. 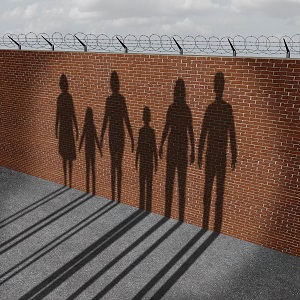 There are 2 Types of Asylum Cases: Affirmative Asylum and Defensive Asylum

Karla read us a question sent in by a viewer:

"I am in Asylum case, I am Cuban. But my wife is living the same terrible situation in Cuba, could she not be able to live her asylum case inside the U.S. either?"

Attorney Kate responded that at the moment this is uncertain since normally a person from any country of origin who comes to the border asking for protection can enter and ask for asylum.

However, due to all the changes in the MPP program, it is possible that his wife is going to have to register at the border to apply for the program and then wait outside the United States. The best option would be for her to find a safe place in Mexico where she can live while she is being interviewed.

What Are The Chances Of Winning An Asylum Case While Inside The United States?

It depends on the type of case being filed. In the case of Affirmative Asylum, we are talking about a person who is already in the country and is not in Deportation Proceedings. However, it is advisable to file the application if you have a good chance of winning your case because if you are not approved you will enter deportation proceedings and will have to opt for Defensive Asylum.

A follower asked us:

"Why can a person's Visa be taken away?"

There are several reasons. The most common cases are people who have a tourist visa but are working and living in the country and overstaying. Immigration agents are able to conduct an investigation on people they suspect are living in the U.S., and look for evidence such as a driver's license, or a social security number, or a check from an employer, etc.

Another question we received from a viewer was as follows:

"Do you think Asylum applications in the U.S. will increase after what happened in Afghanistan? What about Afghans who were already inside the country at the time of that conflict in their home country?"

We would be talking about two different cases: people applying for Asylum and people who are in refugee status. Refugees are people who receive protection outside their country of origin, who are in a refugee camp, and/or who receive assistance from the United Nations and enter the United States with legal and protected status. It is a somewhat limited program, although the Biden administration announced that it will increase the number of visas allocated for this group of refugees.

When we talk about Asylum we are talking about something different, it is for people who are in the United States, or who come to the bridge or the border or have crossed and are now seeking protection. Attorney Kate advises Afghan nationals who are in the country to research and review their asylum options.

Should you have additional questions, please feel free to contact us at (855) 502-0555 for a free consultation. Rest assured that we will always answer your questions honestly and always keep in mind the best option for you. You can also follow us and keep up with our latest updates on our social networks Facebook, TikTok, Instagram and YouTube.