My Meeting With President Bush

My Meeting With President Bush 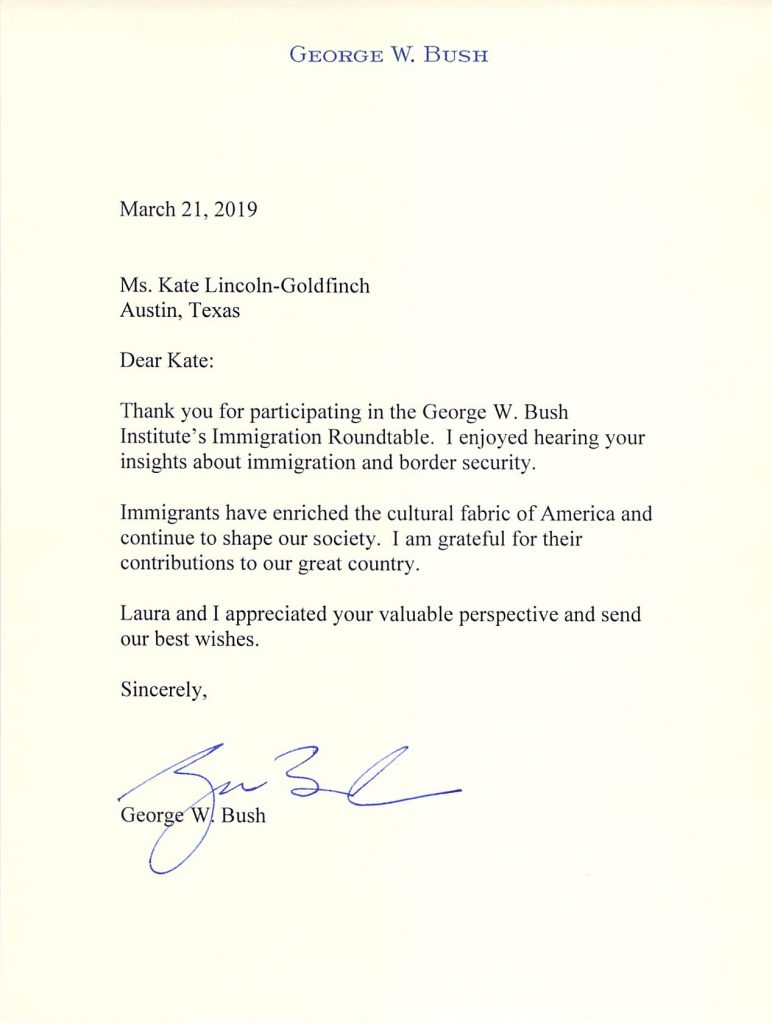 Two weeks ago, I was honored to be invited to a roundtable immigration policy discussion at the George W. Bush Institute in Dallas. The discussion centered around immigrant contributions to the United States and the need for common sense immigration reform that responds to the needs of the American economy and industry. My role was to bring the perspective of asylum seekers, which is poignant this week as we see news about the so-called migrant “crisis” at the southern border.

The meeting preceded a citizenship ceremony held at the Bush Institute, where immigrants from 22 nations became U.S. citizens. In his opening remarks at the ceremony, President Bush said “So many of us can draw a line somewhere back to a man or woman who had the idea that life could be better – and that hope led them here. Generations of new arrivals left their mark on our national character, in traits that friends abroad still recognize as distinctly American: our optimism, our independence and openness to the new, our willingness to strive and to risk, our sense of life as an adventure, dignified by personal freedom and personal responsibility. Such qualities don’t come out of nowhere. A spirit of self-reliance runs deep in our immigrant heritage, along with the humility and kindness to look at someone less fortunate and see yourself.”

The policy meeting included President and Mrs. Bush, Congressman Will Hurd, international business leaders, a DACA recipient, and a representative from El Salvador. There were only eight participants in the meeting. It was closed-press, so I can’t disclose everything that was said, but I can say that there was consensus that we need a better response to Central American migrants who are experiencing violence and lack of opportunity in their home countries. The Bush Institute has convened the Central America Prosperity Project that aims to help the Northern Triangle countries find solutions to corruption, informality, and lack of transparency, which are all push factors for migration out of Central America. In my opinion, this is a critical and important inquiry in today’s immigration discussion. You can read more about their work here: https://www.bushcenter.org/explore-our-work/developing-leaders/central-america-prosperity.html.

In the last week, the Trump Administration has released thousands of Central American asylum seekers at the southern border giving the illusion that our immigration processing systems are overwhelmed and cannot handle this “surge.” This is a manufactured crisis and unfortunately, I think the media is buying the ruse. Did you know Karnes Detention Center has only 63 individuals detained as of the writing of this article? The facility has capacity for over 700. We have had an established way to process asylum seekers for over twenty years and we often experience an uptick in asylum seekers during the spring months. As Trump tweets threats to close the US/Mexico Border and cut off aid to Central America, his administration is also creating the illusion of a border emergency to support his threats and emergency declaration regarding funding for border security.

Cutting off aid to Central America is exactly the wrong approach. We need to increase aid to Central American Countries to help them stabilize. I think we should explore the creation of a circular migrant labor option that responds to the needs of our economy while also infusing Central American economies at the grassroots level. Of course, a move like this would be included as part of an immigration reform bill, which is not on the horizon any time soon. In the meantime, let’s start by NOT cutting off aid to Central America. That’s an easy one. Also, let’s use our established systems to humanely process asylum seekers, beginning with allowing people to come to the border to seek asylum through the legal process that was established by our laws forty years ago.